It's easy to fall into the trap of false promises that many companies make of gaining large amounts of space by removing localization files on a Mac. Fortunately, the free Monolingual‘s message is clear: it’s possible to reclaim several hundred megabytes of disk space and nothing more. True to its name, the third party software, aims to serve one clear purpose, which is simply to make the Mac monolingual. Assuming that you are using your Mac in only one language, English, then Monolingual offers the removal of all other languages as well as non-Intel architectures to free up space.

Developed by Ingmar Stein, Monolingual is a simple utility. At launch it will present a dialog box with two tabs and various selections. One tab contains the languages and the second highlights the system architectures it is able to remove. After making the right selections, users just need to hit “Remove” and confirm their action in the prompt. Monolingual does a good job of removing the selected languages. 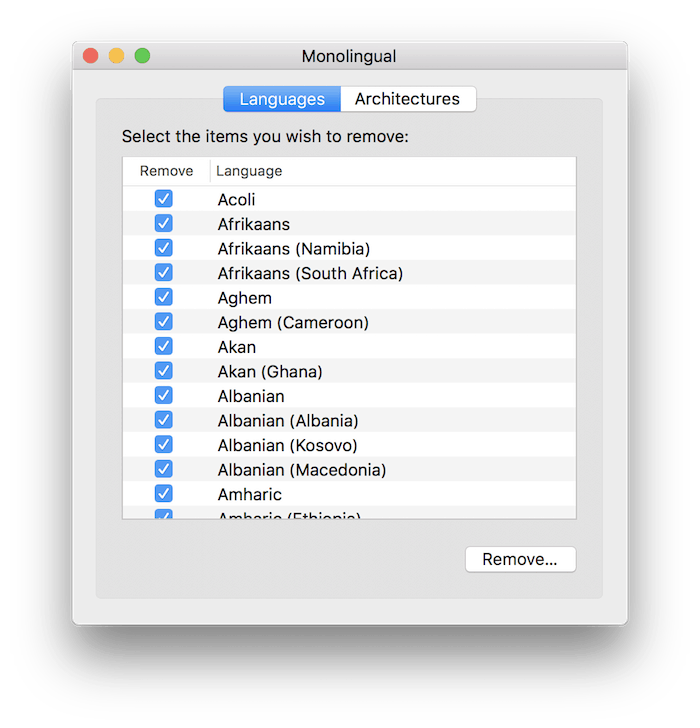 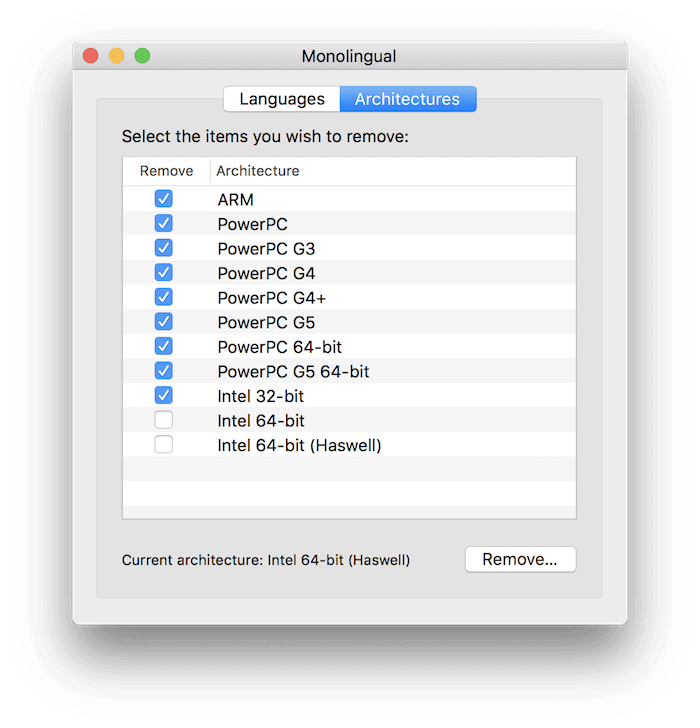 However, the main question is whether you need an app for localization file removal, as the amount of space language files occupy is rather small. For example, in our testing the system-wide usage of French – included in various apps stored on our computer, such as iTunes, 1Password and much more – claimed only 16.2MB of space. Now, even if you add all the other localization files included in the apps, the reclaimed disk space won't necessarily pass the 300MB mark. 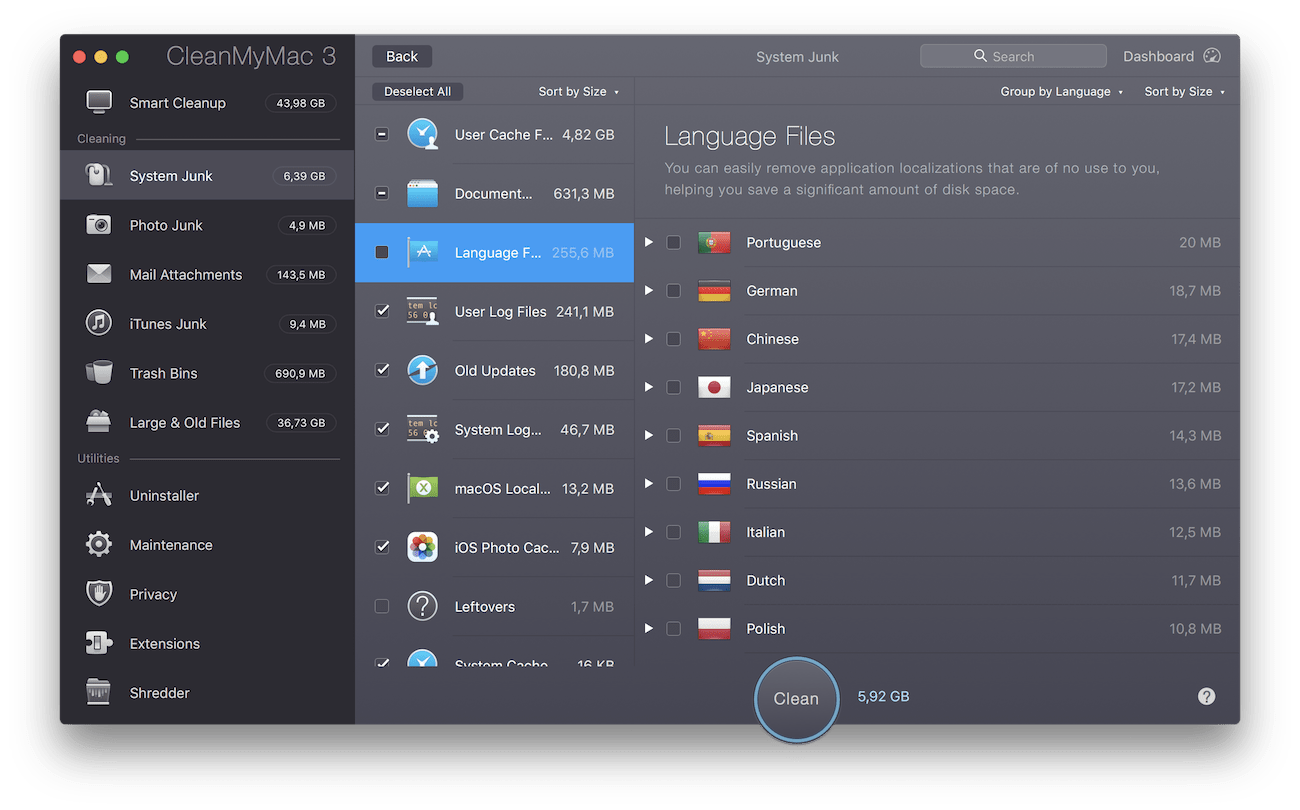 The majority of high-quality Mac optimization apps already include a feature for removing localization files, so it wouldn't make too much sense to keep an app for that purpose only, unless you want to remove the non-Intel architectures too. Mac optimization apps, on the other hand, help to reclaim gigabytes of space by removing system junk, iTunes junk, duplicate files, and the like. That's much more effective than removing localization files, which will occupy a few hundred megabytes of storage space at most.

When Monolingual launches, it will ask you to select the languages you wish to remove. It is highly recommended that you go through the list, because the majority of languages are selected by default. Since this also includes the English language pack, you risk removing the English language as well, which would render macOS unusable. If you have removed the language pack, the only way to get it back is by performing a system reinstall.

Monolingual's secondary feature, architecture removal, is something to consider. The app is ‘smart’ enough to not remove PPC forks if those are the only ones in the universal binary. However, you should not strip out the System frameworks if you want to use Rosetta, as it needs the PowerPC code for all frameworks used by the emulated application, the developer notes. 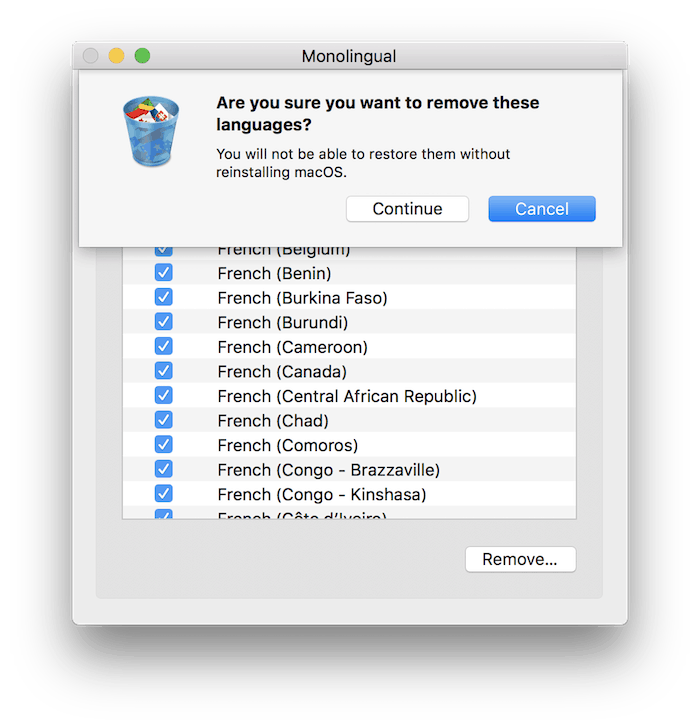 Space Gained by Removing One Language 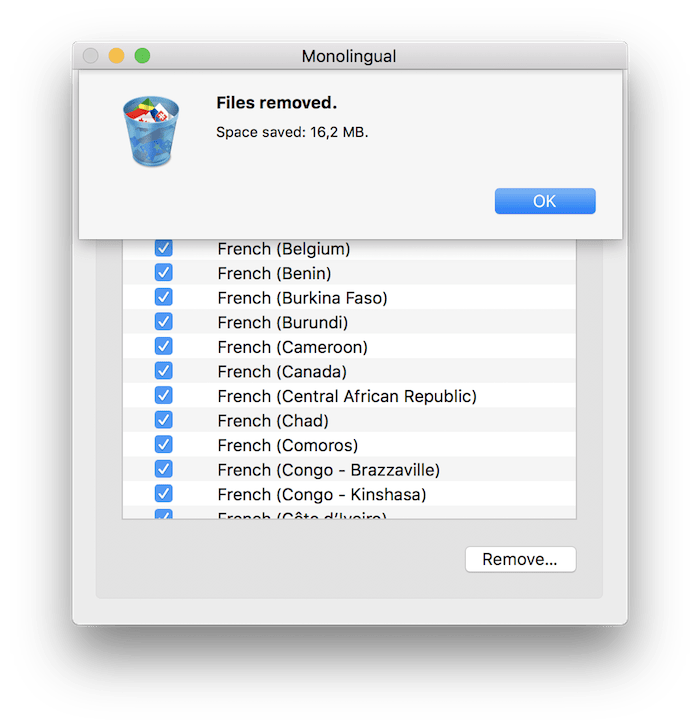 In the end, Monolingual is a safe app if used with due care and knowledge (especially with the architecture feature). We can recommend Monolingual to those who don't have a Mac optimization app and need every byte of disk storage. However, it is highly recommended that you only download the app from the dedicated website, for two reasons: first, this means you will receive the latest version, and secondly this way you know the app you are downloading is safe.