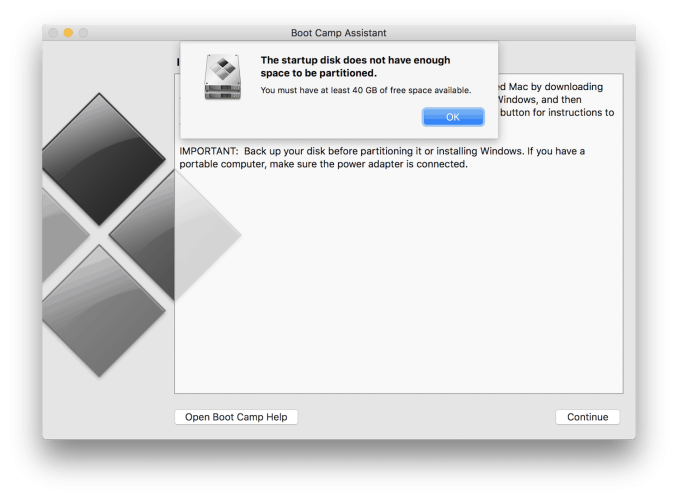 Boot Camp allows users to run Windows natively on the Mac's hardware, meaning a great user experience is guaranteed by taking advantage of the gorgeous Retina screen. There are some caveats you'll have to deal with before enjoying Windows, however, such as deciding how much space to allocate to the OS or addressing errors that appear during the installation process.

How Much Space Should You Devote to Windows?

Assuming that you have everything needed for a seamless installation process – in particular a valid Windows 10 license and an installer disk or ISO file – then the main questions should revolve around what your reason for using the OS is and how much you think you might need.

Among the first steps that Boot Camp Assistant will guide the user through is to create a Windows partition. This partition is called Boot Camp and will be formatted as NTFS, which is a Windows-specific file system. While the minimum requirement for Windows 10 is 40GB of space, users should pick the right partition size for their needs because it's impossible to change this later. If this is the case, then users can remove the Windows partition and create a new one of the right size, but this process will delete the content already saved on the existing partition.

If you plan to use Windows a lot, then the most logical choice is to divide the startup disk into two equally-sized partitions. For occasional users, a recommended 50GB will be enough. It all comes down to the usage.

Once you have decided the size of the Windows partition, select the ISO image, press the “Install” button and let Boot Camp partition the startup disk for you. 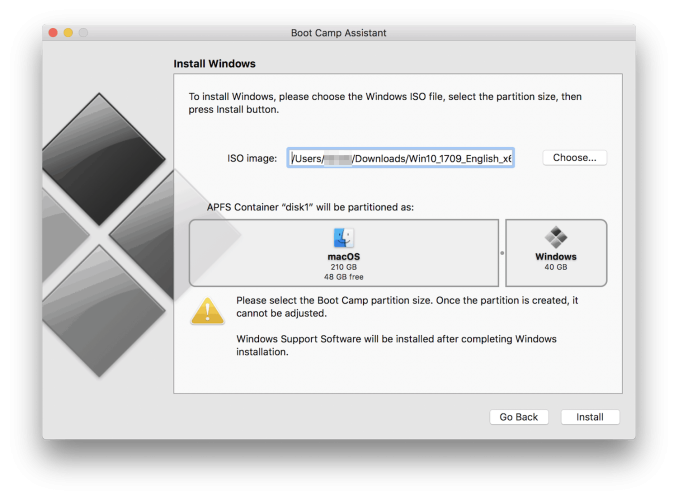 The partitioning process should take no more than a couple of minutes. If you notice any slowdown in the progress bar then it's a sign that Boot Camp Assistant has encountered an error and won't be able to partition the startup disk. Ultimately, Boot Camp will return an error message such as “The startup disk does not have enough space to be partitioned.”

This error is specific to Mac computers that have migrated to APFS. Apple's new file system has a nice feature called “local snapshots” that are activated as part of Time Machine. Local snapshots enable users to restore data even if the Time Machine backup disk isn't available as it stores the data on the startup disk.

One snapshot is saved every hour, meaning that Time Machine takes a snapshot of your whole system at that point in time and stores it locally. These snapshots occupy space, but Finder and Get Info functions don't include them in their calculations of the storage space available on the startup disk.

As such, despite seeing the available disk space in the “Storage” section of “About This Mac”, these local snapshots can take up a vast amount of storage and may even prevent Boot Camp from having enough space to do its job. To address this and the “APFS Container Resize error code is 49153” error message, users will need to disable Time Machine and delete all local snapshots stored on the startup disk following the steps below:

The Space Difference Between Boot Camp and Virtual Machines

Due to the nature of Boot Camp users need to make a decision from the start as to what the Windows ‘disk’ size will be before even installing the operating system.

Virtual machines take this burden off the user’s shoulders as they utilize dynamic storage. What this means is that the disk size grows or shrinks as the guest operating system demands, which is certainly a huge advantage when compared to Boot Camp because users aren’t locked to a certain amount of space for the Windows partition right from the start.

Are you planning to install Windows via Boot Camp or a virtual machine?